We are in the throes of a pandemic and locked down in our homes. 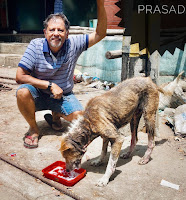 The street dogs have no clue why there are no humans on the road. They don’t understand why the restaurants where they rummaged through the trash cans, are closed. Their beseeching eyes speak a thousand words, but would anyone spare a thought for these homeless canines? If only they had a voice!

Thankfully, humanity is still alive and there are many people in this world, whose hearts beat for these stray animals. Prasad is one such benevolent soul who adopted a street dog a few years back.  Last year, when the pandemic was raging and the city was eerily silent, he noticed during his morning walks, that these street dogs would look longingly at the doors of restaurants or passers-by as if to ask what was going on!

Prasad understood the doleful look of one such dog that neither barked nor demanded attention, but stood by his gate everyday, waiting to spot him. He responded by offering food and water to his silent visitor.  Soon he brought a companion along and they were a happy duo who became a part of his daily feeding regimen.

One of them was severely infected with a skin disease. Most people might have ignored it or looked away in disgust, but Prasad was different. He took him to a vet who suggested it could be cured with imported medicines, costing 2000 rupees per dose, in addition to 1300 rupees for IV fluids. He went ahead, footed the bill for three such doses and also earned the ire of a hostile neighbourhood for treating and caring for a stray dog. A few acrimonious exchanges later, some neighbours threatened to report to the authorities. Much to Prasad’s chagrin, the dog was picked up and sent away in his absence. 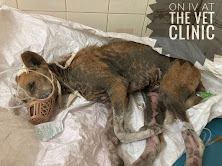 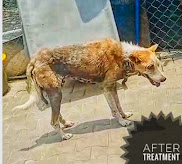 The next day, when Prasad went out to feed the other dog, he refused to eat and he noticed that his eyes were searching for his companion. Prasad was disturbed, but did not lose hope and tried to locate the centre where the sick dog might have been housed.  After a few futile attempts, he called his friend Girish who owns a shelter, described the missing dog and asked him if by any chance, it had landed there. The description fitted the new entrant in the shelter that housed 130 rescued dogs. Girish sent him a picture for confirmation and Prasad was overjoyed to spot him there.

A few days later, the dog recovered completely and settled down in his new habitat. But here was a catch. Girish’s shelter admitted only injured or sick dogs and since he was fully cured, Prasad would have to take him back. Prasad requested Girish to retain him till the lockdown was lifted, as he now had two dogs – the first, adopted a few years ago and the new lonely one. He just did not have the facility to adopt a third dog.

In the meanwhile Prasad reached out by placing bowls of milk, eggs and water around restaurants where the dogs habitually looked for food. The shop owners around the area regularly informed him that the dogs had emptied the bowls. 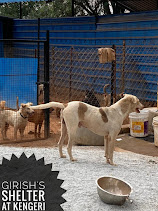 Every citizen has a right to feed or care for stray animals. The rules say it is illegal for any individual or Resident Welfare Association (RWA) to remove or relocate a dog. They have to be vaccinated, sterilized and returned to their area.

There are also rules that do not permit dogs to be fed in public streets, pedestrian pathways or at the entrance to houses and apartment blocks. Feeding is meant to be done in areas where density of human population is low.

The rules must be strictly adhered to, both by the feeders and the naysayers. While the feeders would do well to abide by society’s unwritten protocol of not causing trouble for the residents, the naysayers could learn to be more compassionate towards these helpless animals.

In these times of environmental degradation and a worldwide pandemic, do humans have the exclusive right to proclaim ownership of Nature's territories? Plants and animals have as much right to Nature's resources as we do. We live in an ecosystem where mutual co-existence is vital to maintain the right balance.

Dog is man’s best friend and an integral part of our community. They have lived with humans for ages. Ethically and morally, it is our responsibility to care for them.

on May 10, 2021 No comments:
Email ThisBlogThis!Share to TwitterShare to FacebookShare to Pinterest
Older Posts Home
Subscribe to: Posts (Atom)